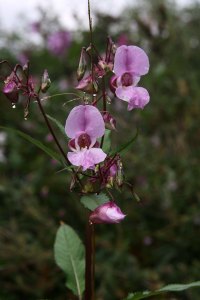 51 members travelled to Richmond (originally the first walk of the season that was cancelled due to heavy snow). After heavy rain the night before, the day was dry and muggy as 24 members set out on the ‘A’ walk while after lunch, 23 members did the ‘B’ walk. The ‘A’ party set off to descend to the River Swale and followed it through National Trust woodland to reach a footbridge over the river to emerge next to a car park and caravan site. We crossed the main road and followed tracks onto Whitcliffe Scar giving tremendous views all around. We stopped at the 3 Willance Leap monuments: a stone bearing the words of Robert Willance in 1606 and an obelisk commemorating the 1906 tercentenary celebrations and a third stone remembering him in 2006. On a day in November 1606 Robert was out hunting, got lost in the mist and his young horse panicked and took 3 enormous bounds and leapt from the edge of Whitcliffe Scar and fell 212ft. Miraculously Robert survived but had to have a leg amputated. We continued on to  reach a minor road which we descended to a bridlweay. The track took us past Applegarth and below the Willance Monuments. After going through Whitcliffe Wood we descended into Richmond.

This entry was posted in Summer walks, What we saw and tagged Richmond. Bookmark the permalink.