Posted on September 21, 2013 by LaurelsLodge 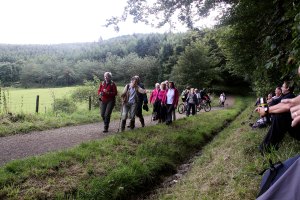 46 members set out on a dry sunny day for Guisborough. After the coffee break 21 members set out on the ‘A’ walk then shortly after 20 members did the ‘B’ walk. The ‘A’ walk proceeded along the road to a stony lane and took a steady climb in the warm sunshine to reach Guisborough Woods. Woodland tracks were followed on the lower section of the wood. We sat alongside the track for lunch and the ‘B’ party passed by.  They stopped for lunch while the ‘A’ party continued on its way.  At Hutton Village we endured an extremely steep climb to the top of Highcliff Nab. As we admired the distant views of the sea it was obvious that a mist was rolling in as it started to shroud a group of wind turbines. We walked along the high tops and descended the wood to reach Slapewath. After a short stretch of road walking we crossed fields and passed the ruins of Guisborough Priory at the end of the walk. An extended stay before travelling directly home.

This entry was posted in Summer walks, What we saw and tagged Guisborough. Bookmark the permalink.