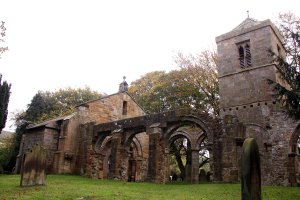 A dry and sunny day as 57 members made the short journey to Barnard Castle for coffee before the coach travelled on to Whorlton where 26 members set out on the ‘A’ walk while the coach continued on to Piercebridge for the ‘B’ walk. The ‘A’ party followed the Teesdale Way long distance footpath by joining the riverside path adjacent to the River Tees from a stony track in Whorlton. Most of the time the path was high above the river separated by steep cliffs. As we walked at the side of Wycliffe Woods we could see the woodland floor carpeted with bluebells and primroses. We stopped for lunch in a grassy field where red helleborines were growing, quite a rare sight. Good paths were followed through a nature reserve and then there was a stretch of road walking to Gainford. We passed Gainford Hall, built about 1603. It is grade 1 listed and has numerous tall chimney pots on its roof. At the far end of Gainford we passed the imposing building of St. Peter’s. This was built by the Catholic Church around 1900 as an orphanage for 300 boys. This lasted for almost 40 years. In 1940 it became an approved school until the 1980s and it was then a care home until 2000. It now belongs to two housing companies but the site is currenly derelict because planning permission has not been granted for a housing development. We crossed pasture fields containing horses with hoods over their heads with see through gauge eye slots. Some thought they were being used to keep flies away from the horses faces. We rejoined the riverside path to eventually reach Piercebridge. The coffee shop was overwhelmed as both the ‘A’ and ‘B’ parties descended at the same time. The service was slow but the drinks and food lovely. An evening stop in Barnard Castle.

This entry was posted in Summer walks, What we saw and tagged Piercebridge, Whorlton. Bookmark the permalink.