‘A’ Bill Sillitoe ‘B’ Margaret Palmer 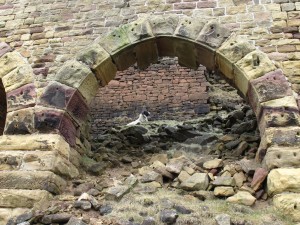 56 members set out on a cold overcast day with a forecast of easterly winds over the North Sea. We stopped at Heighley Gate for coffee spotting tiny lambs in a field on the way. At Craster, 23 members set out on the ‘A’ walk. The coach then travelled to Warkworth so that the ‘B’ party could do a circular walk. The ‘A’ party passed through Craster and caught a glimpse of Dunstanburgh Castle before turning south to follow the coastal path over fields. There was an incoming tide to greet us, with high waves crashing against the rocky shoreline. Britain’s coastlines were facing some of the highest tides of the century this weekend, thanks to an unusual conjunction of the sun and moon. Spring tides occur when the moon and sun are aligned, combining their gravitational pull. These can be amplified by the elliptical shape of the moon’s orbit, increasing its gravitational pull when it is closer to Earth. This conjunction happens every 18 years – and was boosted by effects linked to Friday’s eclipse. The lunch stop was in the shelter of a cove called Iron Scars where we sat on the boulders adjacent to the beach. We watched pied wagtails strutting across the sand and eider ducks riding the waves in the sea. We continued on to Boulmer and saw one of the yellow sea king helicopters landing at the air sea rescue base. We set off walking along the sandy beach and spotted a small dead bottle nosed dolphin lying near the water’s edge. It wasn’t long before we had to find higher ground as the tide was coming in so quickly. Shortly afterwards we discovered the cliff top footpath had been washed away at one point and we had to scramble through a barbed wire fence into a field. One unfortunate member ripped her waterproof jacket on the barbed wire. We walked around the edge of Foxton Hall golf course and rejoined the coastal path to Alnmouth. After a fruit stop we had to walk inland through the village so that we could cross the River Aln via the road bridge. This proved to be quite a detour but there is no other way across the river. We followed a cycle track next to the main road then deviated onto a stony track to reach Buston Links bridle path. This led us through a couple of caravan parks and then Birling Links golf course before descending into Warkworth. This was a 13.7 miles walk, slightly longer than expected but nevertheless a good walk for the start of the season.

This entry was posted in Summer walks and tagged Craster, Warkworth. Bookmark the permalink.